Roulette is one of the most popular casino games in the world, and almost as common is the debate on the difference between American and European Roulette. At first glance many casino players cannot tell the difference, but each Roulette variation has its own rules and odds, and a closer look at the tables and wheels of each game reveal even more differences. So we gathered in this article all the information you need for deciding which side of the Atlantic you take in the showdown between American Roulette vs European Roulette.

There is no unanimous agreement on the origins of Roulette. Some believe it is based on an ancient Chinese board game that required to arrange 37 animal figurines in a magic square. Closer to Roulette as we know it today, Roman and Greek soldiers in ancient times used to play betting games involving spinning a shield or a chariot wheel.

But it is most widely believed that Roulette was invented by French math wizard Blaise Pascal sometime in the 17th century. Although associated today with the American Roulette wheel, Pascal’s version of the game originally had two ‘zero’ pockets. As gambling became illegal in France, French brothers Fancois and Louis Blanc introduced in 1842 the first single-zero pocket Roulette game at a spa casino in Baden Hamburg, Germany. Several years later they brought Roulette back to France upon the request of Prince Charles of Monaco III, hence the origin of the name ‘French Roulette’.

European Roulette was introduced to America by European settlers that landed in Louisiana in the early 19th century. When casino proprietors there wanted to increase the house edge they reintroduced the double zero-pocket which is today the most distinct feature of the American Roulette wheel.

Fast forward to 1994 when Roulette was introduced to the internet with the launch of the first online casino. Taking technological innovation further, today many online casinos offer live-dealer Roulette games which enable to play Roulette at a real table from the comfort of your own home. 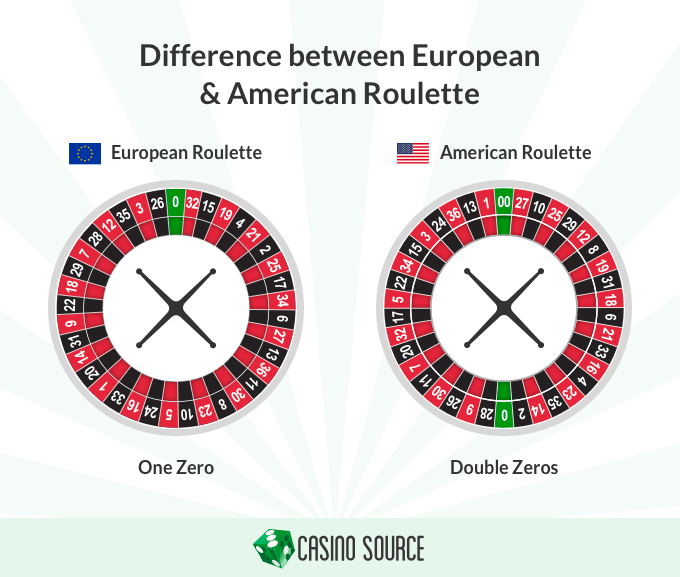 If you like to play on the go then check out our recommended list of mobile casinos!

The aim in all roulette games is for the player to place bets on specific numbers and/or events (these are called ‘outside bets’ – for example betting on odd/even, black/red, 1-12, etc.). The dealer then spins the wheel and if the ball lands on a predicted number and/or event, the player wins the bet. Players cannot bet on the zero number/pocket, and this is where the differences between the two versions begin – a European Roulette wheel has one zero pocket and an American Roulette wheel has two (marked with ‘0’ and ‘00’). Whilst the basic rules across different game variations are similar, there are specific rules that are unique to European Roulette as opposed to American Roulette and vice versa.

When playing at the European Roulette table, players can ‘call bets’ which means they can place a bet by announcing it to the dealer instead of putting chips down on the table. Usually the option of calling a bet is reserved for more complex betting actions. At many European Roulette tables players can also make use of French Roulette rules, namely the ‘En Prison’ rule which allows you to spin again if you placed an even bet and the ball landed on the zero pocket, and the ‘La Partage’ rule which allows you to split and lose half your bet. We cover these rules in detail, including their RTPs and odds in the dedicated French Roulette section below.

If you are sat at an American Roulette table and the ball lands on a zero pocket (and remember: on an American Roulette wheel there is not one, but two of these!), all number and outside bets are lost. You can also place a five-number bet (also known as a ‘top line’ bet) which is a bet on the numbers 1, 2, 3, 0 and 00. Given there are two chances of losing due to the ball landing on zero pockets, this bet is pretty risky, with a house edge of a massive 7.89%!

The Main Differences between European and American Roulette

The following table provides a comparison of the differences between European and American Roulette games:

Odds and RTP for American vs European Roulette

Some players dismiss the difference between American and European Roulette, thinking “how much of a difference can one pocket on the Roulette wheel make?” but a quick look at the statistics show that the European Roulette odds and RTP (Return to Player) add up considerably to the benefit of the player. If you are interested in compering odds, RTP and other game rules and features, there are many other exciting Roulette game types which are definitely worth exploring!

Zeros in European and American Roulette

Check out our recommended list of casino bonuses available for you to redeem today!

Professional Roulette tables at casinos have a rectangular shape and are usually made of leather or polished wood for upscale tables, or synthetic upholstery for the larger, more casual gambling halls. Many tables still have drink and ashtray holders (remanence of the times when smoking was still allowed in the casino). The Roulette wheel itself sits on an independent, stabilized structure to prevent players from moving the table and indirectly affecting (deliberately or not) the movement of the wheel.

European Roulette tables are a bit bigger in dimension, with the wheel positioned on the short side of the table where one dealer sits on a high chair (the table umpire), whilst a second dealer holds a croupier’s rake for collecting chips from the table. Outside bets are laid out on both long sides of the table.

Throughout history and to this day, Roulette games in France have been a main source of entertainment in large social gatherings. So it is common to find in French casinos and gambling salons large, double French Roulette tables with the wheel based in the centre and two betting layouts set, one on each side of the wheel.

Although looking similar at first glance, the European and American Roulette wheels have quite a few differences in design. The most obvious clue which we covered already is the single zero pocket on a European Roulette wheel vs two pockets on the American wheel. But the numbers are also ordered very differently on each version. 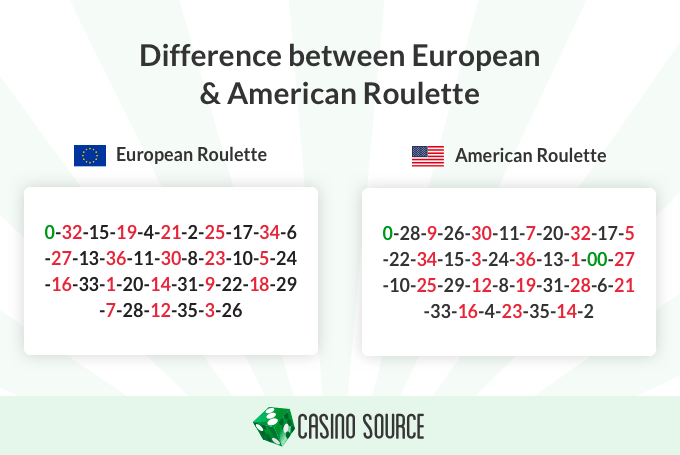 Types of bets in European and American Roulette

The following table gives a more detailed review of the types of bets available and the odds (which are your chances of winning) when comparing European vs American Roulette:

French Roulette in Comparison to American and European Versions

French Roulette is a sub category of the game which uses the same wheel and betting options of European Roulette. The games are almost identical, other than two game rules that can work to the advantage of French Roulette players. The first is the ‘En Prison’ rule, which allows you to have an additional spin when you place an even money bet and the ball lands on the zero pocket.

Second, is the ‘La Partage’ rule which means ‘splitting’. Following the ‘La Partage’ rule in French Roulette, if you lose on an outside bet you will receive half of your bet back in case the ball lands on the zero pocket. By taking advantage of these rules, players can actually reduce the house edge from the European Roulette standard of 2.6% to as low as 1.35%! 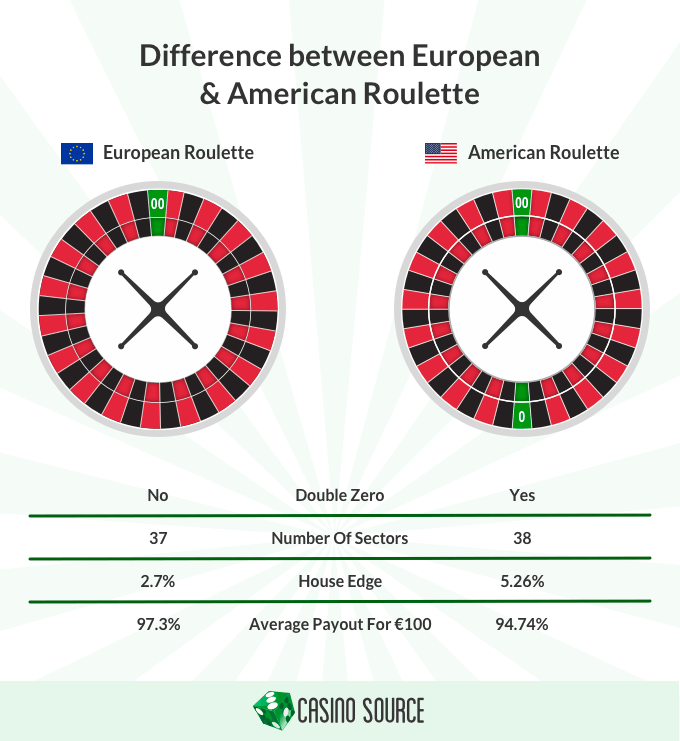 Conclusion – which Roulette Game is Better?

We really thought long and hard about a way to sound original and not state the obvious conclusion. But numbers don’t lie so when comparing between European and American Roulette, the odds are clearly in favour of European Roulette. It isn’t an opinion or assumption, it is fact – no matter which bet you place, your chances to win over time are considerably better at a European Roulette table.

So, what are the advantages of playing American Roulette and why is it so popular in the US? Possibly the thrill of having two zero pockets (if the fear of losing more thrills you…), and for those that are looking for excitement and action there is the top-line (5 numbers) bet which is available only in the American version of the game. Although it brings the House Edge up to a whopping 7.89%, the 6:1 payout is pretty attractive.

There are different strategies you can follow playing either American or European Roulette that can not only increase your chances to win, but also make the game more challenging, exciting and fun. So do some research about which variation is best for you and have a look at the rules. You can learn from players that developed great skills in the game and put your skills to the test at the best online Roulette sites in the country.

Whether you play American, European or any other version of Roulette, always keep in mind that it is a game of chance and luck plays a major part in every spin of the wheel. So always stick to your limits, play for fun and keep it safe. When the fun stops and you are about to lose more than you intended to, take a break and leave the table. So you can come back next time, all fresh and ready to land those winning spins.

🔴 Is American or European Roulette better?

⚫ What is the difference between French, European and American Roulette?

The main difference between the European and American Roulette variations is the addition of the 00 pocket in the American version. French Roulette is similar to the European version, aside from two rules: la partage and en prison. Both of these rules relate to outside bets and what happens if the ball lands on 0. The la partage rule means you can get back half your bet instead of losing it all, or you can use the en prison rule to lock your bet until the next spin of the wheel.

🔵 What is the French Roulette table?

French Roulette uses the same wheel as European Roulette, but it has a different table layout. The betting grids tend to be on both sides of the table rather than arranged on one side and, traditionally, the table cloth is red. However, these differences are cosmetic and many of the bets remain the same. The main advantage to playing French Roulette are the la partage and en prison rules.

🟢 What is the most successful roulette strategy?

The best betting strategy to use when you play roulette is the Martingale system. This betting system works best on bets with odds that are as close to 1:1 as possible, so you need to keep to the odds/evens, red/black and high/low options. Decide on a base unit, and double it each time you lose. When you win, go back to your base bet. Our Martingale System Guide explains the strategy in detail.

Ziv Chen has been working in the online gambling industry for over two decades in senior marketing and business development roles. Ziv writes about a wide range of topics including slot and table games, casino and sportsbook reviews, American sports news, betting odds and game predictions. Leading a life full of conflict, Ziv constantly struggles between his two greatest loves: American football and US soccer.

Get the MGM Resorts Experience Online