CasinoSource.ca
» guides »
Where in Canada Are You Most Likely to See a UFO?

Where in Canada Are You Most Likely to See a UFO?

Where are you most likely to see a UFO in Canada? Or even an alien life form?

UFOs in Canada have been spotted ever since the country was founded. Canada’s top ufologist was recently called in to brief the minister of defence on unidentified flying objects. The government keeps a database of over 9,000 records of UFO information, so their existence is hard to deny.

The truth is out there, and we’ve got the numbers to prove it.

We decided to find out which provinces have the best odds of seeing a UFO. We can reveal this by analyzing the number of UFO sightings in all 13 provinces and territories with data from the National UFO Reporting Center.

We've calculated the odds of seeing a UFO in each province. Find out by exploring the map below. 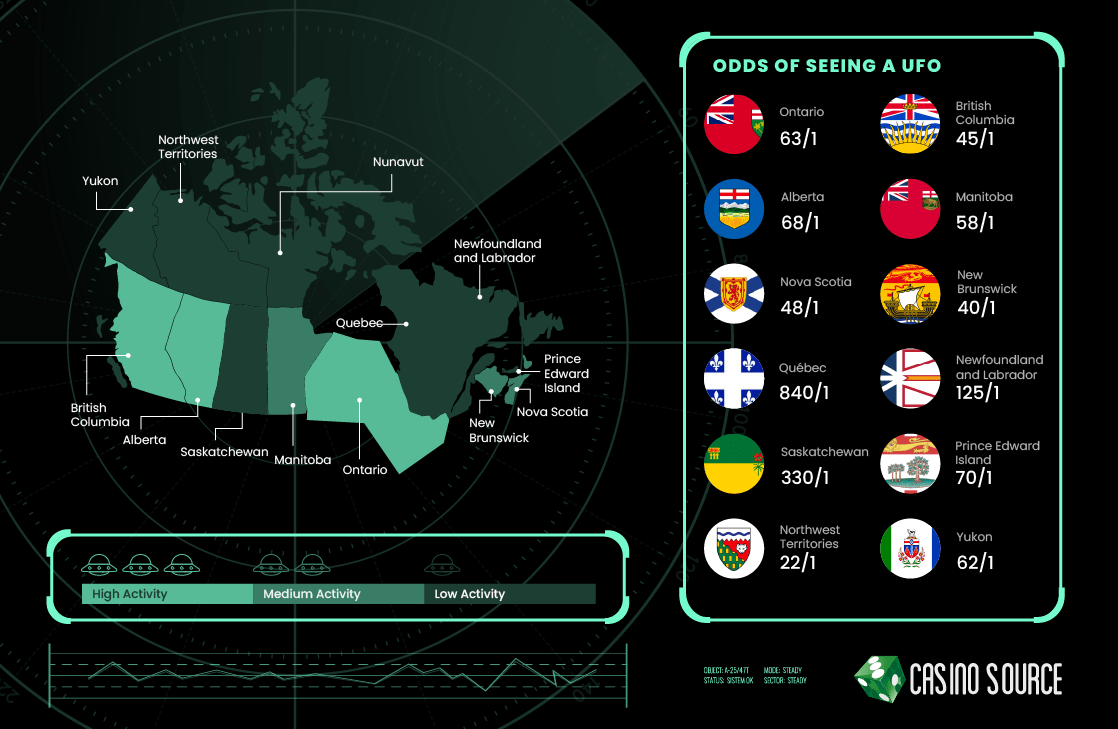 The most and least common places for UFO sightings in Canada

Using the data from the National UFO Reporting Center, we’ve been able to rank each province according to the possibility of encountering a UFO in your neighbourhood.

Where in Canada is it most likely that you'll see a UFO?

Ontario is the UFO capital of Canada, with an incredible 2,380 sightings, more than any other province in the country. This is over twice the number of extraterrestrial encounters recorded in British Columbia (1,151), which ranks second overall.

Meanwhile, Alberta (654 encounters) is the third most likely province to have encountered alien life. Right behind are Manitoba and Nova Scotia, which had 230 and 212 encounters, respectively to round out the top five most likely locations in Canada to spot a UFO.

The province of New Brunswick is right in the middle of all other provinces and territories, with 198 sightings.

Where in Canada is it least likely that you'll see a UFO?

So far we have no confirmed sightings of UFOs at all in Nunavut, and Yukon has documented just seven sightings. The Northwest Territories come in third with just 20 sightings overall. So avoid the territories if you’re looking for extraterrestrial life!

Sightings of UFOs are similarly rare in Prince Edward Island, which has only ever documented 24 cases of extraterrestrial sightings. Saskatchewan is next with only 35. The number of sightings is just as low in Newfoundland and Labrador (42), and Québec (102), so altogether these four are the provinces with the lowest likelihood of seeing a UFO. 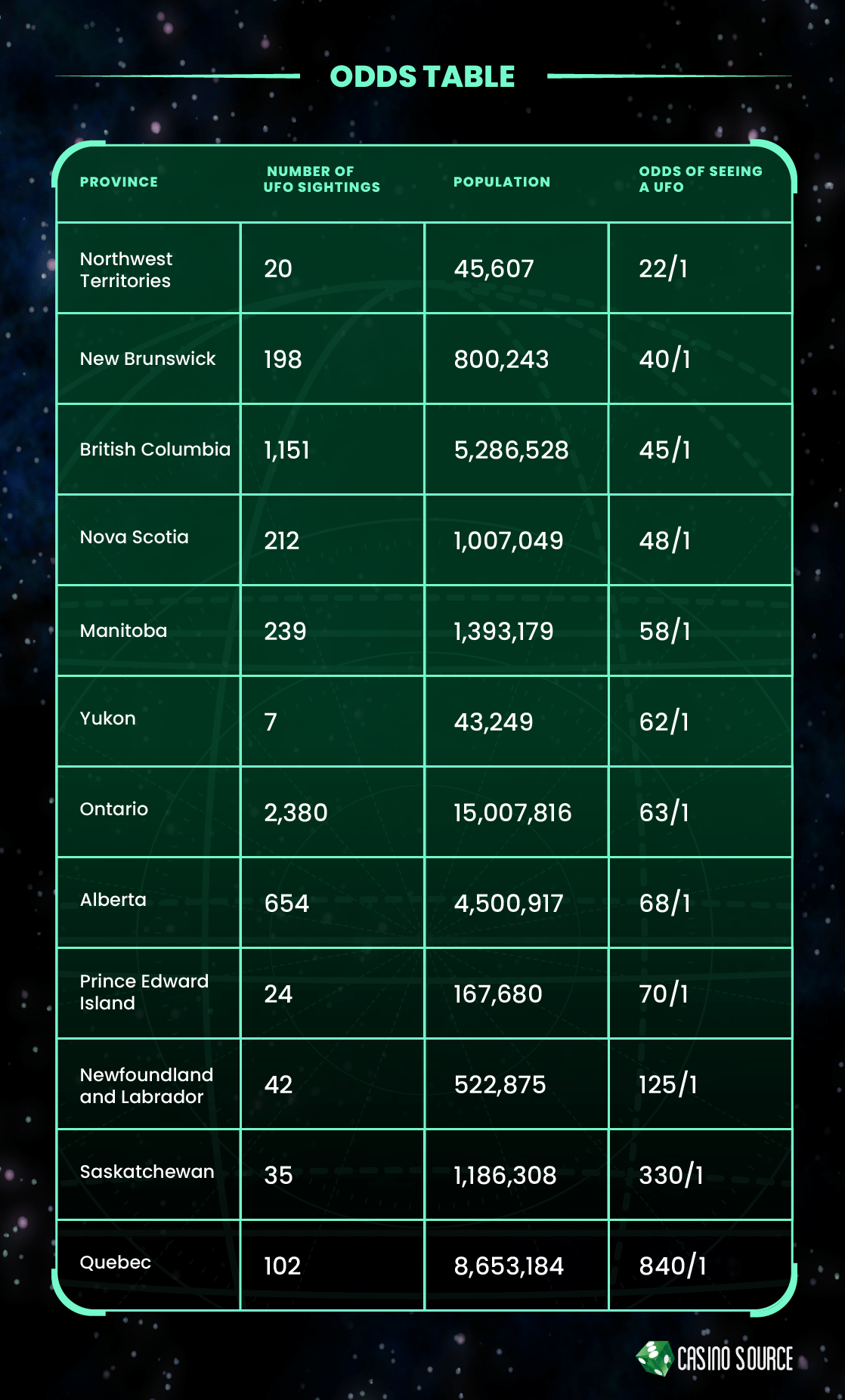 When Were You Most Likely to See a UFO in Canada?

South of the border many Americans started recording and sharing their stories of unidentified objects, especially after the crash and cover-up in Roswell, New Mexico.

The experts in Canadian ufology have said that after the 2020 pandemic there was an increase in sightings, but they had recorded a rise even before that in 2017 when they released a study showing a spike in sightings.

Here's a graph showing how common UFO sightings have been in Canada over time. 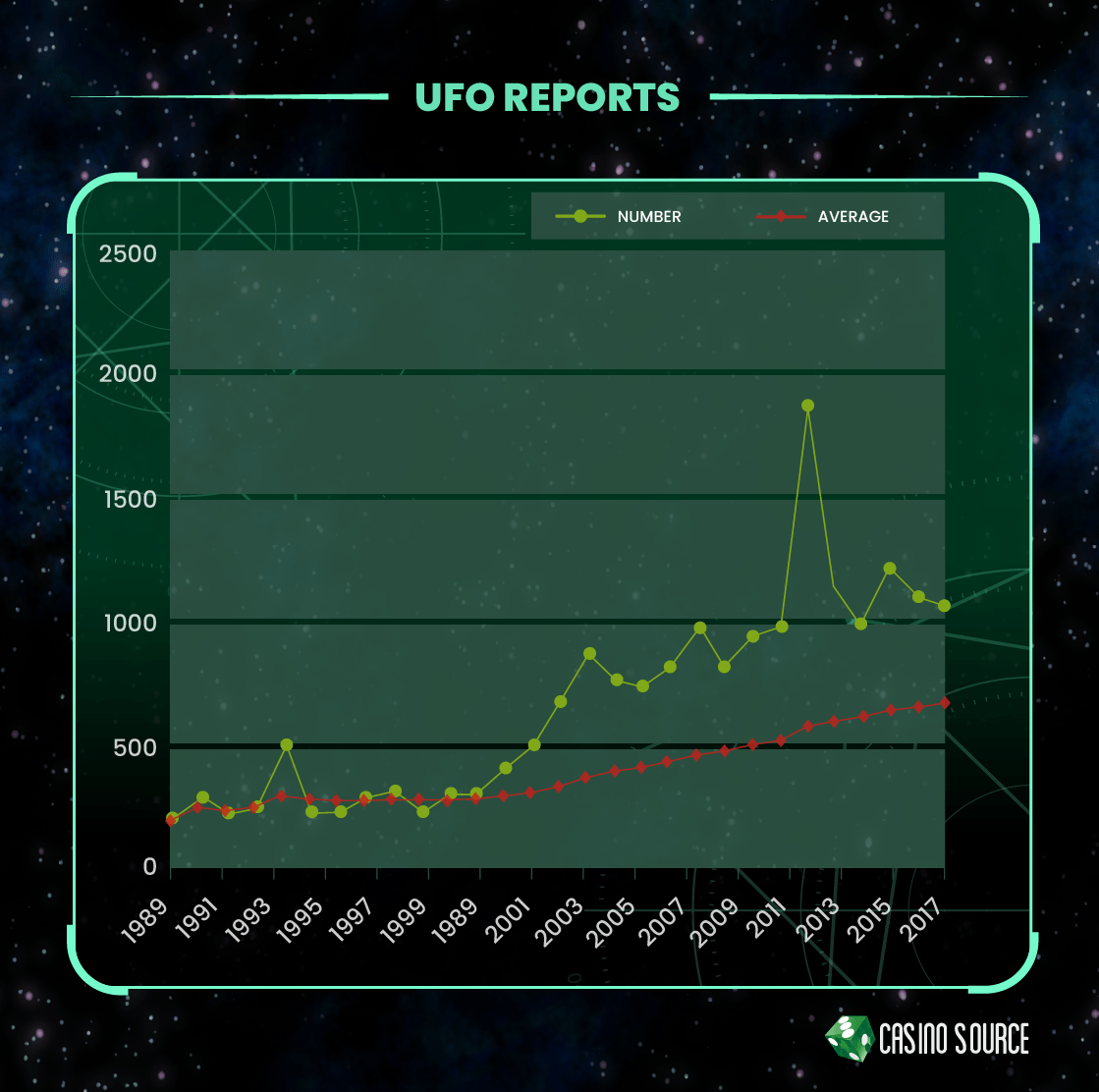 UFOs are a hot topic right now, and sightings have actually increased over the past two years. So no matter the odds in your province or territory — keep your eye on the sky just in case! For even better odds, check out the latest Canadian online casino bonuses that are available right now.

When using this data and research, please attribute it by linking to this page and citing CasinoSource.ca

Fana is a writer and content specialist who specialises in the dynamic world of international publishing. For the past few years her area of particular interest has been in the evolution of gaming laws due to her legal background. You can catch her sailing or swimming at the nearest beach when she's not keeping up with the most recent iGaming news or honing her poker abilities

Get the MGM Resorts Experience Online