CasinoSource.ca
» guides »
4 Slots to Play During the Winter Olympics

4 Slots to Play During the Winter Olympics

PyeongChang in South Korea is set to host the XXIII Winter Olympic Games from February 9 to 25, serving up a variety of icy challenges. Fortunately, Canadian slot gamers can take the more relaxed option, by loading up the best winter sports video slots and swapping gold medals for the chance of jackpot payouts. Check out these awesome Winter Olympics slot games.

Is there an official Winter Olympics video slot?

The official video game for the 2018 Winter Olympics is called “Steep Road to the Olympics” and allows gamers to take part in 12 Olympic events, including downhill skiing, giant slalom, ski cross, big air, halfpipe and slopestyle. It’s been developed by Ubisoft and builds on the company's Steep video game – an extreme sports title released in 2016. Unfortunately, this game hasn't been made into a video slot version, but the good news is there are still stacks of Winter Olympics-themed slot games to play during PyeongChang 2018 – including Winter Gold, Ski-Jump, Ice Hockey and Breakaway slot machines. 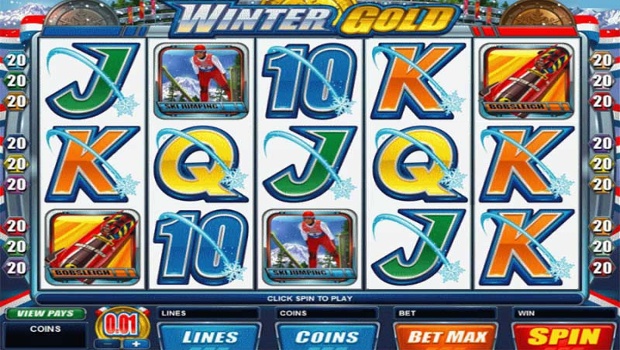 Winter Gold slot machine was released to coincide with the 2010 Vancouver Olympic Winter Games – making it a sure-fire winner this time around. Powered by Microgaming, the slot features a five-reel and 15-payline gamescape and four Olympic event stages. The game is playable with vast range of coin sizes and is loaded with an array of winter sports symbols such as bobsleighs, speed skaters, ski jumps, and biathlon, plus classic slot machine A, K, Q, J, 10 and 9 symbols. The stars of the game are the wild Winter Gold logo and the Gold Medal bonus symbols.

The wild can line up five in a row to payout up to 100,000 coins, while the Gold Medal scatters trigger an awesome bonus round that can shower lucky competitors with coins, free spins, or one of the four event bonuses (biathlon, bobsleigh, ski jump and speed skating). The interactive style of the bonus round is a winner and really gets you in the mood for the 2018 Olympics – not to mention the fact that the scatters can payout up to 120,000 coins. 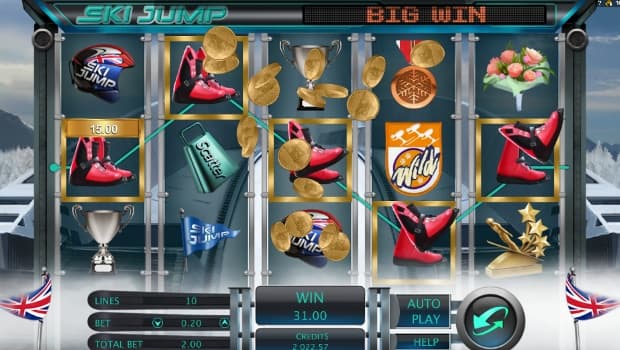 The ski jump is one of the most daring events in the Winter Olympics, and Genesis Gaming delivers a treat with the Ski Jump slot, based on the Microgaming Quickfire platform. Set across five reels and ten paylines, it honors the ski jumpers who risk life and limb in pursuit of gold. Reel symbols include skis, ski boots, goggles, prize bouquets, helmets, Olympic medals, trophies and wild icons. The slot machine features several cool bonus elements and features, including the cowbell, ski jump and extra wilds. The sound of the iconic cowbell ushers in the jumpers and acts as the game's scatter symbol – match two or more and the reels stick during the respin.

Things get interactive when the ski jump bonus is launched with three or more cowbells – an awesome feature where players must use their judgment and click the button to jump for glory and cash prizes. Finally, the ski jump wild feature can randomly pop up on any spin, turning reels two, three or four wild to potentially pay out multiple rewards. The cool interactive ski jump bonus makes this game super fun and guaranteed to get you in the spirit of the Winter Olympics 2018. 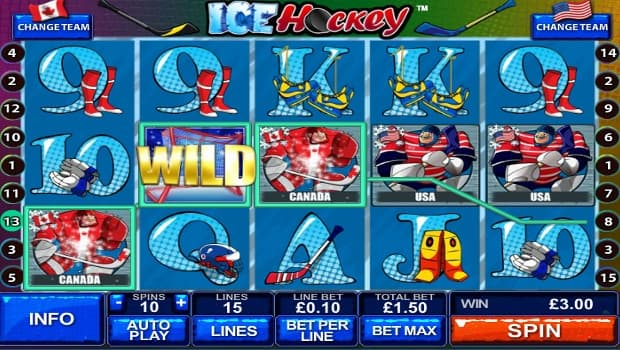 If you're seeking Winter Olympics-themed games, then there's a good chance that Playtech's Ice Hockey slot machine is going to be a winner. One nice aspect of the game is the chance to pick two teams to play against each other – for example, you can pit Canada against the USA. In fact, for added realism, you could even mimic some of the ice hockey matches played at the forthcoming Games.

The machine features five reels and 15 pay lines, with iconic symbols bringing the key features of ice hockey to the slot screen. The bonus game in the Ice Hockey slot features the puck being passed around the ice, with each player revealing a different bonus amount. The combination of cool arcade graphics and sound effects, interesting team selection features and fun bonuses, makes Ice Hockey slot a fun game to play during the 2018 Winter Olympics in South Korea. 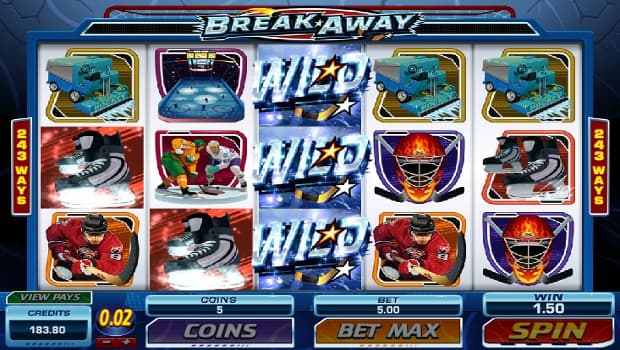 If you like Ice Hockey slot, then you'll probably love the Break Away slot machine even more – it’s another title that lets you hit the ice in search of rewards during the 2018 Winter Olympics. The game features five reels, 243 ways to win and excellent graphics and entertainment. The animations in the game really deserve special kudos, with ultra-real animations and a great range of symbols in the form of the hockey rink, masks, ice skates, sticks, biscuit in a basket, flaming pucks and more. When combined with the atmospheric fan chanting, the stacked wilds, smashing wilds, rolling reels, scatters and free spins make the Break Away slot game totally epic.

The Break Away logo acts as the stacked wild and can deliver up to 40 per spin to turbo-charge prizes. Even better, matching five flaming pucks puts you in the big time with a 125,000 coin jackpot on the max bet, while the Random Smashing Wild feature can make players rush onto the reels to expand the wilds and boost payout chances. The Rolling Reels feature makes symbols fall from the top of the screen to fill empty spaces on winning spins, potentially forming multiple combinations. And finally, the flaming pucks can payout 15, 20 or 25 free spins, with multipliers from 2X to 10X.

While there may not be an official Winter Olympics Slot Game for 2018 in PyeongChang, there are a host of winter sports slot games to get you in the mood for the Games.